The Greenbrier Ghost: A Ghost Convicts Her Killer

Elva Zona Heaster died in West Virginia, USA, in January 1897. Her death was originally thought to be from natural causes. But when Zona’s ghost began visiting her mother, the death began to look a lot more suspicious. This terrifying true story details the trial of Zona’s murderer and the evidence presented against him from Zona herself, beyond the grave. Read all about … the Greenbrier Ghost. 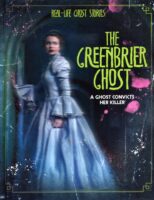 The Greenbrier Ghost: A Ghost Convicts Her Killer
£6.50